One of my current research projects in Santa Rosa examines behavioral, endocrinological, and genetic correlates (including kinship, reproductive success, and the major histocompatibility complex [MHC]) of male life history and reproductive strategies. The main goal of this longitudinal project is to understand how hormonal and social factors influence the emergence, from puberty into adulthood, of dominance status in male white-faced capuchins (e.g. Jack et al., 2014). My collaborators (Stacey Tecot, and Eva Wikberg) and I have several current grants (Leakey Foundation, Nacey Maggioncalda Foundation, National Geographic Society) that enabled us to continue data collection for this project through 2017, thereby providing a decade of behavioral data and hormone samples from male capuchins residing in five study groups (2007-2017). Identifying traits and processes influencing individual variability in reproductive success is fundamental to understanding evolutionary processes. In our capuchins, like many other socially living mammals including humans, there is a strong association between dominance status and reproductive success, however we still know very little about how and why some males attain alpha status while others do not. These data, along with our ongoing studies of the role of the major histocompatibility in male dispersal and mate choice decisions (funded by the LA Board of Regents, with Jessica Lynch Alfaro), will provide us with a holistic picture for examining male dominance and reproductive biology. 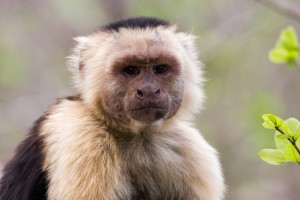 Legolas has been the alpha male in our CP study group since 2007 (an impressive 10 years during which time he sired >20 offspring). This male has been studied since his birth in our LV study group in 1994. Update: Legolas is no longer alpha male as of Nov. 2018, though he remains on in the group as a subordinate male.

The effects of forest protection, forest regeneration, and climate change on primate populations.

My second major project in Santa Rosa involves an on-going examination of the long-term population trends of the capuchin and howler monkeys (e.g. Fedigan and Jack, 2012). We have been conducting park-wide censuses of these two primates since the project began in 1983, the most recent of which I co-directed with Fernando Campos in 2017. Several interesting trends have emerged from our analyses of these long-term data, the least of which is that if forest is protected and allowed to regenerate primate populations will return and thrive. To this end, we have documented that the population size more than doubled for both capuchin and howler monkeys between 1983 and 1999 (from <300 to > 600 individuals). However, between 1999 and 2007, the howler population experienced zero population growth, likely having reached the carrying capacity of the environment with regards to the state of forest regeneration. This population plateau was followed by an abrupt crash to ~300 howlers between the 2007 and 2011 censuses. We are currently exploring a variety of explanations for this dramatic decline (e.g. climate change and pesticide use), which was sustained in the 2013 and 2015 censuses

Santa Rosa National Park at the end of the dry season. Photo taken by K. Jack in April 2015.